Crowdfunding has come a long way since 2014, when the novelty of the idea alone helped a man in Columbus raise $55,492 to make a potato salad. In 2019, the global crowdfunding market was valued at $13.9 billion and that number is expected to triple by 20261. Such figures have understandably attracted the attention of NGOs and non-profits around the world looking for alternative revenue streams. But how promising a method is it really for raising funds?

The first critical point to note is that the great majority of crowdfunding volume is loan and equity based. In other words, funds are donated with the expectation of repayment with interest or in exchange for ownership of shares of the company. While some of the investors in this space are impact-oriented, surveys suggest that around 70% are seeking at least market-rate returns (~10-15% and varies year to year). Most of the high-profile and successful crowdfunding campaigns of the equity / loan model are tech-oriented startups, attracting investors with the lure of a potentially large payoff.

Second, relatively few crowdfunding campaigns meet their targets: just 22.4%. On some platforms, this means donated money is returned to donors, and the campaign organizers are back to square one. Luckily, this is not generally the case for donation-based crowdfunding. Still, success often depends on the investments made into the campaign’s promotion itself (e.g. the creation of videos and marketing materials, advertisements, etc.), leaving smaller organizations at a disadvantage.

All of that might serve to temper one’s enthusiasm for crowdfunding, but for some organizations, it might still represent a great avenue to explore. Despite representing a minority of crowdfunding revenue, there are countless examples of environmental and social impact campaigns that have attained wild success, and the variety of projects is astounding. Three million dollars were raised recently to protect a 2,000-acre stretch of wilderness near Vancouver, Canada from development. On a more representative project scale, a farm-your-own-mealworms (eco-friendly protein source) startup called LIVIN Farms Hive raised over $145,000 on a $100,000 goal just last year. 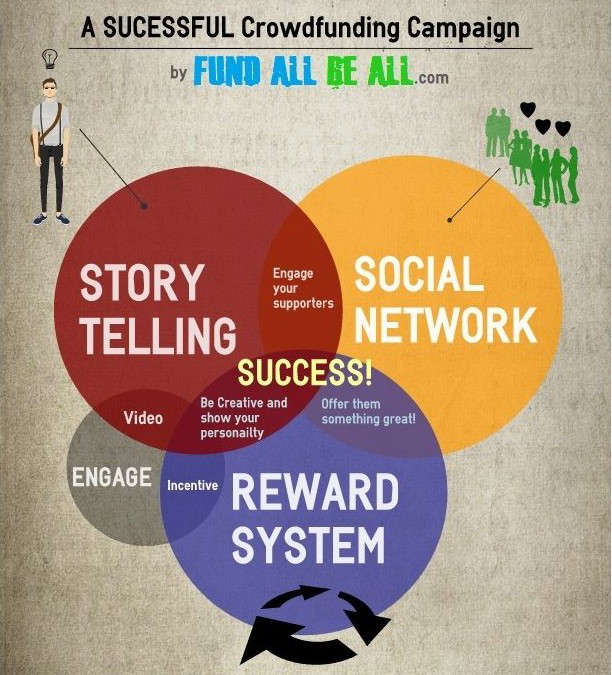 So what separates the successful campaigns from the failures? In addition to having the time and funds necessary to promote a campaign, being able to leverage a large network of potential donors is also extremely valuable. Organizations with established, far-reaching access to a pool of engaged supporters will naturally enjoy a strong advantage. It is also worth bearing in mind that many psychological studies suggest people are at their most altruistic when shown an emotional, highly personal story. Campaigns that can link donations directly to concrete outcomes for specific individuals tend to do well. In line with this strategy, lower campaign targets generate more interest; individuals feel that even a small contribution actually makes a difference. Finally, successful crowdfunding campaigns build their “crowd” via diverse mechanisms. Creating shareable content and leveraging your first-level network to get the word out is critical, but media attention, advertisements, and getting influencers on board shouldn’t be overlooked as ways of expanding one’s audience. The most promising, well-established platforms include GoFundMe, Kiva, Lendahand, and Kickstarter.

Another useful strategy to consider is a slight twist on the strictly donation-based model called rewards-based crowdfunding. This entails tiered systems of rewards, where donations of different amounts result in various awards. This could be a physical product, or sometimes access to an event and other less tangible benefits. For example, an eco-retreat in Croatia far exceeded their crowdfunding targets with enticing rewards such as having a chicken named after the donor (min. $50 donation).

The bottom line: for organizations with a unique, high-impact project, crowdfunding could be a great way to generate initial funds and get it off the ground. However, competition for donors is fierce; before investing heavily in a campaign, these organizations should do a careful risk analysis and ensure the potential benefits outweigh the costs.