Today, we face four catastrophes at once: 1) the COVID-19 pandemic, 2) climate change, 3) institutional racism, and 4) political polarization and attacks on democracy. There are innumerable ideas circulating for how we can solve all four crises, many being discussed at length, but one solution seems to be missing: put more women in charge.

If that sounds too glib, or too much like a naïve silver bullet solution, the data will bear it out. According to Pew Research Center, women are 30% more likely to provide fair pay and benefits, 34% better at working out compromises, and more willing to stand up for their beliefs. Harvard Business Review reported last year that both men and women think their female leaders are more effective in 84% of the competencies that most companies measure, such as taking initiative, acting with resilience, driving for results, and displaying high integrity and honesty. The Harvard Business Review also reported that injecting women into just 30% of the c-suite leadership meant a 15% growth in an organization’s bottom line.

Women carry these qualities into the environmental space and strengthen solutions. A review of 17 studies from across the world showed that including women in conservation and natural resource governance resulted in stricter and more sustainable extraction rules, greater compliance with rules, greater transparency and accountability, and better conflict resolution.

If it’s such an obvious solution, why are women still not in charge of more institutions? We hear frequently that unconscious bias plays a part — women are simply not perceived as being capable of holding down a big role. Or that women lack confidence, don’t speak up, or take themselves out of the running for leadership jobs. But this doesn’t seem to explain the global phenomenon of men running almost every government and big business on Earth and serving as the vast majority of senior leaders in nonprofits and on boards. Women are in charge of comparatively little, and women of color, even less. Take heads of states and presidents of countries — just 10.8% are women. Women comprise 24% of U.S. federal legislators; women of color account for only 9%. Or take big businesses — just seven percent of all Fortune 500 CEOs are women. Of those 37 women, only three are women of color.

Is it simply cultural, something that’s impossible to change? 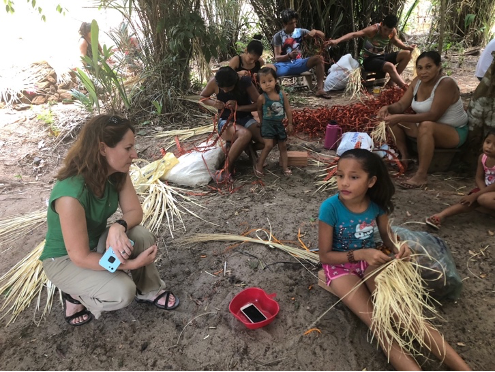 It’s no longer acceptable to think this way. Pandemics, racism, and other global crises demand a world where everyone has the opportunity to try to solve the urgent problems we face. We need everyone’s brain power – not just white men’s.

Let’s embrace women’s superpowers to collaborate, trouble-shoot, and drive for results. If you’re a CEO or a leader of any stripe, promote more women and women of color into real positions of power and invite more of them to participate in problem-solving and decision-
making.

If you’ve been in a CEO role for more than 10 years, start building the next cadre of leaders and strategize your succession plan. If you’re a woman considering running for office or applying for a big promotion, get support and coaching. There are myriad groups out there to cheer you on and help you rise.

A new style of leadership is needed to help a world on the brink of catastrophe not only recover, but build something better. Let’s not leave future generations to question why we kept so many innovators from solving our most crucial and urgent problems. It will not be easy to change our cultures, but there’s no better or more effective way than letting women lead.

Kristine Zeigler is the co-founder and CEO of Planet Women, a nonprofit that addresses climate change and other environmental challenges through projects led by women and for women around the world. For the past 22 years, Kristine has been an environmental nonprofit leader focused on helping nature and people thrive at organizations like Conservation International, The Nature Conservancy, the Yosemite Conservancy. Her essay was originally published onMedium.com under the title, “100 Years Later: A Planet in Peril Needs Women to Lead.