ICRNet Program for BIPOC Farmers in the Southeast U.S.

with the support of the William R. Kenan, Jr. Charitable Trust and the Walmart Foundation

“Working with African American farmers in the Southeast U.S. compels us to adjust our conceptual and programmatic focus, from ‘equity’ – ensuring parity in access to information – to ‘social justice’ – considering how information has been or can be used to marginalize or to empower disadvantaged groups.” (Social Justice in Climate Services, Furman, et. al, 2014)

There are increasing risks to BIPOC farmers
from climate change, particularly risk of more regular
and intense droughts and floods, which are expected to
increase in intensity by 50% by 2050.

Today there are only
45,500 Black Farmers, a little
more than 1%
of the total number.

Access to inclusive climate resources can best be
accomplished through networks of existing trusted partner organizations.

Yet those 7.8 million acres owned by Black farmers
are worth $14.4 billion.

The Inclusive Climate Resource Network (ICRNet) is a core U.S. program for N4J and is funded through partnerships with The Kenan Charitable Trust, The Walmart Foundation, and other donors. The purpose of the ICRNet program is to provide access to resources to create greater climate resilience among BIPOC (Black, Indigenous, and persons of color) farmers in a three to five county region.

The ICRNet will consist of a network of regional partners promoting awareness and access to climate-smart agriculture practices, regional climate risk analysis, financial assistance, and capacity development. Each regional network will be supported by a Climate Resource Hub staffed and directed by local practitioners to customize the service offerings to fit the specific regional priorities. The initial pilot Hub will be in central North Carolina and more Hubs are expected to follow after the establishment of the pilot.

Launching Next Phase of the BIPOC Program

Phase 1 of the program began in the Spring of 2021 with a strategic analysis of the needs of BIPOC farmers in the southeastern U.S. and selection of the location for the initial Regional Climate Resource Hub.

Phase 2 began in April of 2022 and is focused on launching an ICRNet Hub serving four counties in central North Carolina (Chatham, Cumberland, Harnett, and Wake counties).

The graphic below illustrates the functions of a Climate Resource Hub. 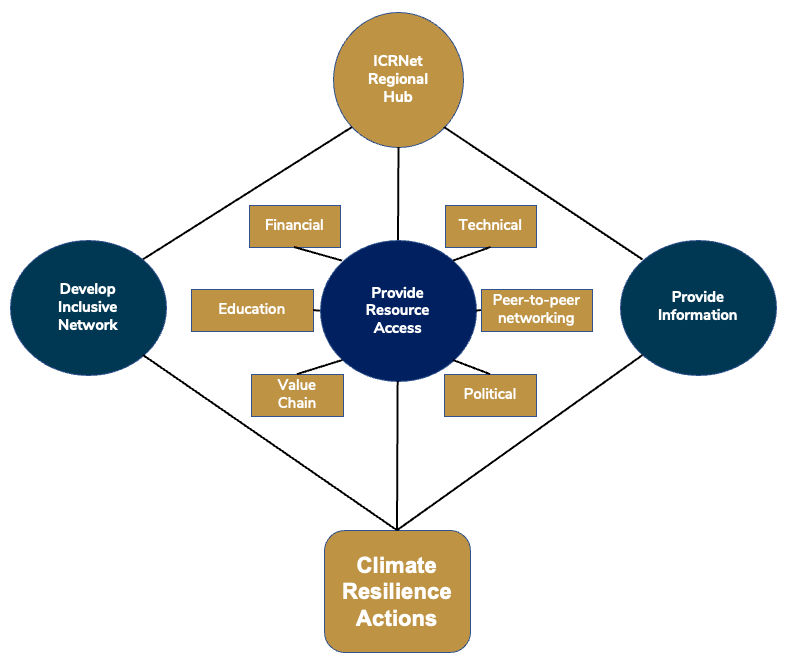 The initial focus of the central NC regional climate resource hub will be addressing risks of droughts and floods through small-scale irrigation systems and nature-based flood management practices. Beginning in the summer of 2022, the hub will conduct research on the needs and priorities for addressing drought and flood risks.

According to an analysis by Climate Central, North Carolina is expected to see its droughts increase in intensity by around 50%. Coupled with the 9.4-degree temperature increase within this century, North Carolina is at severe risk for drastic climate-induced losses.

In addition, the central NC regional hub is sponsoring several programs engaging BIPOC farmer groups in the fall of ’22.

The following Resources section includes a collection of U.S. government publications, news articles, scholarly publications and listing of Black farmers and their market.  We will periodically update this collection. You can also read more about our approach to this important issue on this blog post.

Census of Agriculture – Highlights: Black Producers up 5 percent since 2012; one-fifth serve or have served in the military

2017 Census of Agriculture, Highlights: Black Farmers Up 12 percent since 2007; most live in southern states.

Black Farmers in America, 1865-2000 The Pursuit of Independent Farming and the Role of Cooperative

Who Owns the Land? Agricultural Land Ownership by Race/Ethnicity

Chapter IV: Farm Statistics by Color and Tenure of Farmer (1920)

What’s in the American Rescue Plan Act of 2021 for Agriculture?

$5 billion would go to farmers of color, who have lost 90 percent of their land over the past century because of systemic discrimination and a cycle of debt

Black Farmers May Finally Get the Help They Deserve

A debt-relief program would be a step in repairing more than a century of discrimination by the Department of Agriculture.

The administration has pledged to make agriculture a cornerstone of its plan to fight warming, but also to tackle a legacy of discrimination that has pushed Black farmers off the land.

USDA issued billions in subsidies this year. Black farmers are still waiting for their share.

“We have lived under economic terrorism for decades,” said Georgia farmer Eddie Slaughter. Subsidies issued during Covid-19 are just another form of exclusion, he and other farmers say.

There were nearly a million black farmers in 1920. Why have they disappeared?

Today there are just 45,000 African American farmers. One man is fighting to save them.

The Justice for Black Farmers Act will reform the U.S. Department of Agriculture and create a land grant program to encourage a new generation of Black farmers